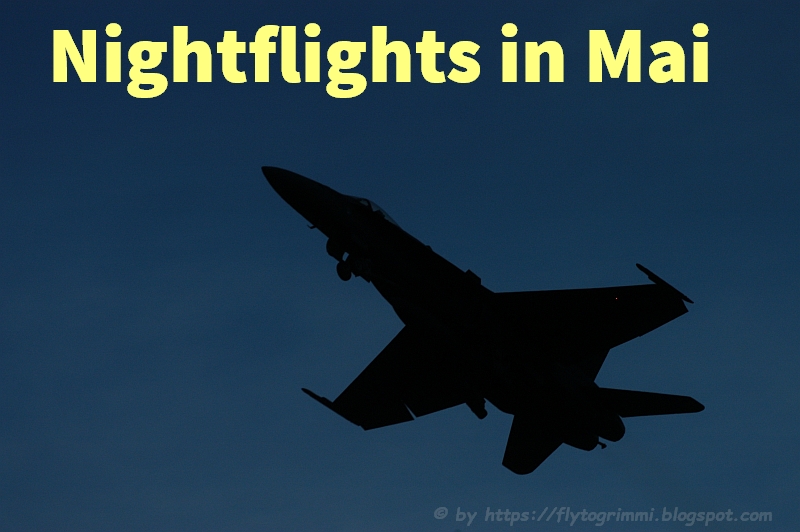 Repetition course of fo av 11 at Payerne Air Base will see supplemental nightflying activities on:

Be aware that during repetition course some time restrictions are changed: Normal flight activity will be from 0700-1800h LT without the normal times of departures and landings. It's possible that also some jets will take off or landing in between 1200-1330h, normally a nogo in normal activity (except QRA). 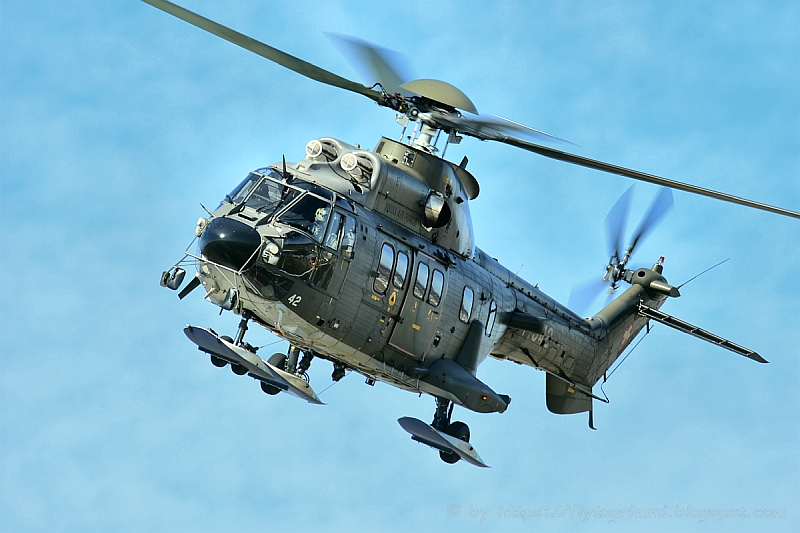 The Lufttransportdienst des Bundes (LTDB, the military transport agency for the government with BizJets and Helicopters) flew 463 hours for the Administration in 2020 (2019: 680): 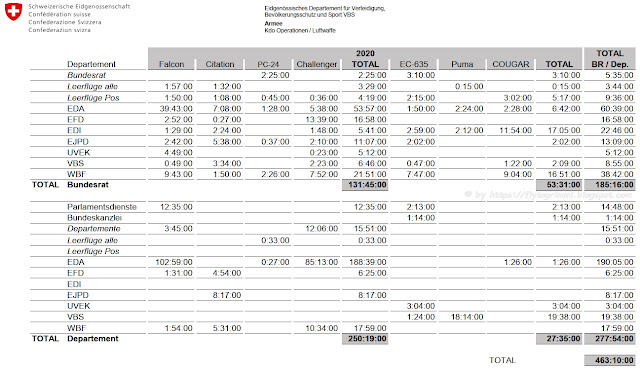 Source and Links for more infos

Hermes 900 HFE drone crash in Israel: Investigation results on the cause of the crash now available

Bern, 11.05.2021 - Following the crash of a drone of type Hermes 900 HFE intended for the Swiss Armed Forces over Israeli territory, the Israeli Ministry of Transport initiated an investigation to clarify the cause of the accident. The final report is now available. The manufacturer has repaired the damage and will cover all costs.

On 05 August 2020, a drone of the type Hermes 900 HFE intended for Switzerland crashed over Israeli territory.  The cause of the crash was subsequently investigated under the direction of the Israeli Ministry of Transport. Clarification has been completed and the investigation results are available.

Crash was due to unexpectedly strong oscillations

According to the accident report, the crash was due to the fact that the V tail unit became detached from the fuselage of the drone due to unexpectedly strong oscillations. The drone could thus no longer be controlled and crashed.

The manufacturer has repaired the damage and will cover all costs

The Israeli manufacturing company Elbit Systems Ltd was able to eliminate the cause of this problem with regard to further production of the drone, without changing the drone’s design. The damage is to be borne entirely by Elbit Systems Ltd (see notice of 06/08/2020).The crash occurred on a test flight of the drone. This resulted in total loss of the drone, but no damage to persons or third-party damage. This is a drone which was intended for the Swiss Armed Forces as part of the delivery scope of the ADS15 procurement.

Delivery from the second semester 2022

Reliable detailed scheduling is still difficult. According to current information, the drones will be delivered from the second semester of 2022 to the summer of 2023. Approval of the radar for the sense-and-avoid system is planned for the end of 2024. The current delays are due, on the one hand, to the time and effort required for certification with the Civil Aviation Authority Israel (CAAI), which was underestimated by the supplier, and on the other hand, to the delayed development of the radar system for sense-and-avoid. In addition, the Covid-19 pandemic has disrupted industry and has severely limited cooperation with the supplier due to travel restrictions and quarantine requirements. Until the approval of the sense-and-avoid radar, the Hermes 900 HFE drone will be deployed in uncontrolled airspace and with an escort aircraft by day.

Radioactivity found in Out of Service C-3605 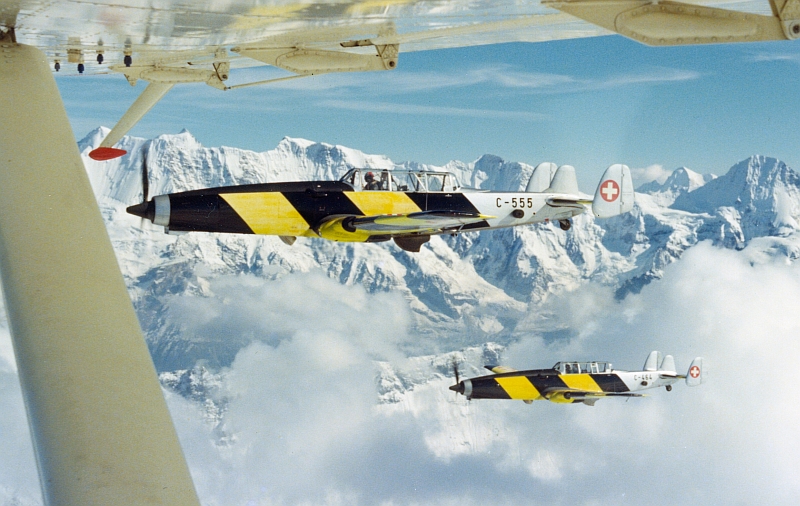 Radon and other minor radioactive parts where found on former Swiss Air Force C-3605 target towing aircrafts, gone Out of Service / WFU in 1987. Actual users where informed and the Air Force is willing to pay for the correct disposal. There is no imminent danger if correctly handled.

Payerne is generating the most flighthours of Swiss Air Force's F/A-18 Fleet and all the bigger maintenance had to be done on the competence center in Emmen. With 12 new working places there can be made up to four big controls per year in Payerne now:

RUAG puts a new site into operation in Payerne

Bern, 03.05.2021 - The construction work for the new RUAG Ltd site on the military airfield in Payerne is now complete. At the beginning of April, the newly formed team was able to take possession of the first F/A-18 and begin working on it. Construction began in May 2020 in cooperation with the Swiss Air Force, and all twelve of the newly created posts have been filled.

With the construction of a new site on the military airfield in Payerne, RUAG Ltd now provides on-site maintenance for the Swiss Air Force in western Switzerland. In addition to the six employees already stationed in Payerne, twelve new posts have been created in the region, all of which have been filled. At the beginning of April, the plane panel beaters, plane mechanics and NDT inspectors (non-destructive testing, a special materials testing process) were able to take possession of the first F/A-18 and begin working on it. Every year, RUAG Ltd can conduct up to four major inspections on the F/A-18 while also providing support for minor inspections.

The extension work in Payerne has made the successful cooperation between RUAG and the VBS, dating back more than 30 years, even closer and more intensive. RUAG employees work side by side and post by post with the members of the Swiss Air Force and are in a position to improve the efficiency and efficacy of the service provision to the Air Force by bringing plane maintenance and operations geographically closer together.

While the need for major inspections at the main site in Emmen will be reduced somewhat with the launch of operations in Payerne, the overall level of services provided to the Air Force will remain the same in the future. With some of the burden being removed with the development of the new site, the RUAG Ltd employees in Emmen can now focus more of their attention on the F/A-18 restructuring program.

With about 7,000 F/A-18 movements per year, Payerne Airfield is the main Air Force site for fighter planes and the headquarters of the Air Police service. The target set by the Federal Council of being able to ensure the Air Police intervention capability 24/7 and 365 days a year was implemented at the end of last year. 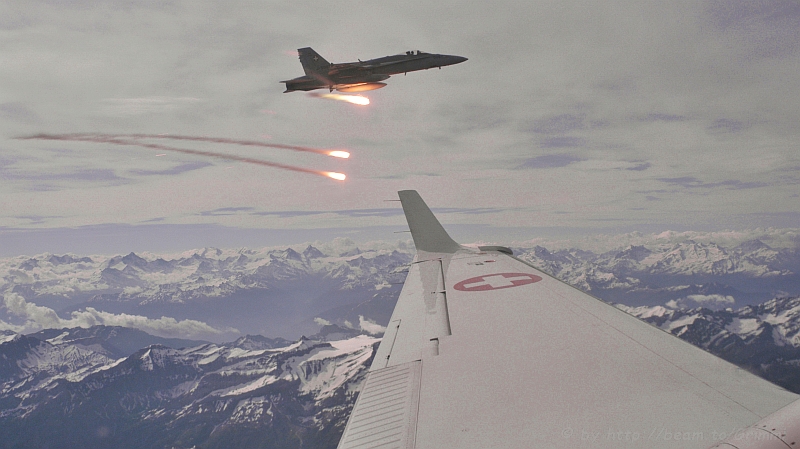 Another checkup of the QRA organisation had been successful completed in the evening of April 29th, 2021 out of Payerne. 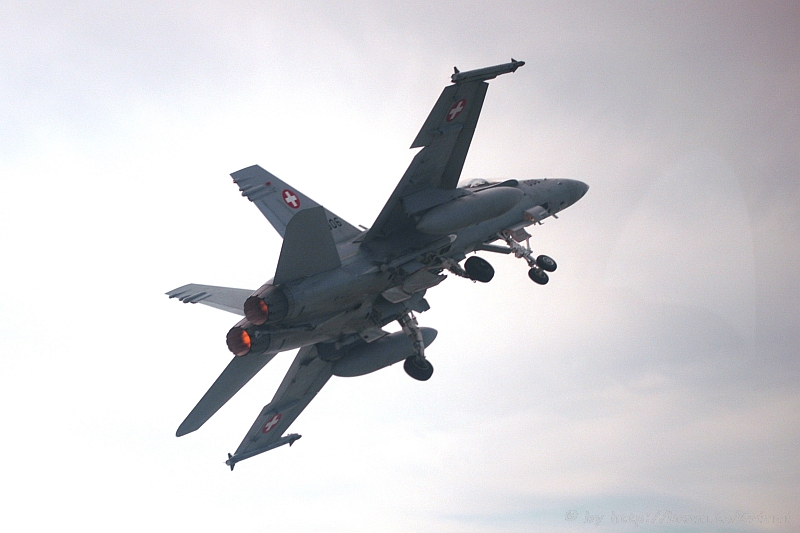 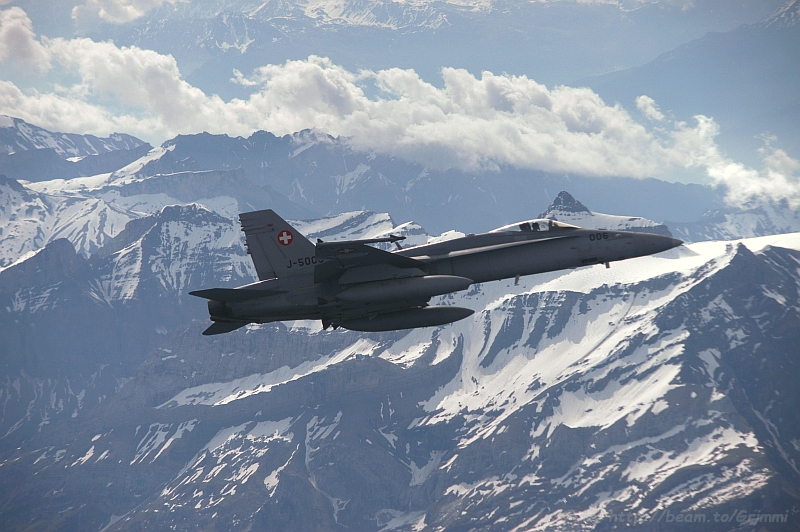 The Swiss Super Puma Display Team will also begin the training week soon and will be present on some shows if #COVID19 will end. Stay safe and wear masks ! 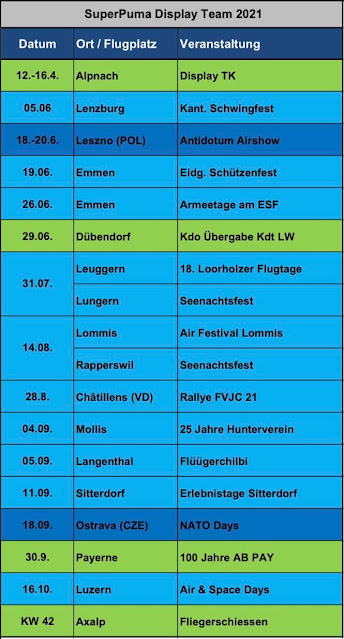 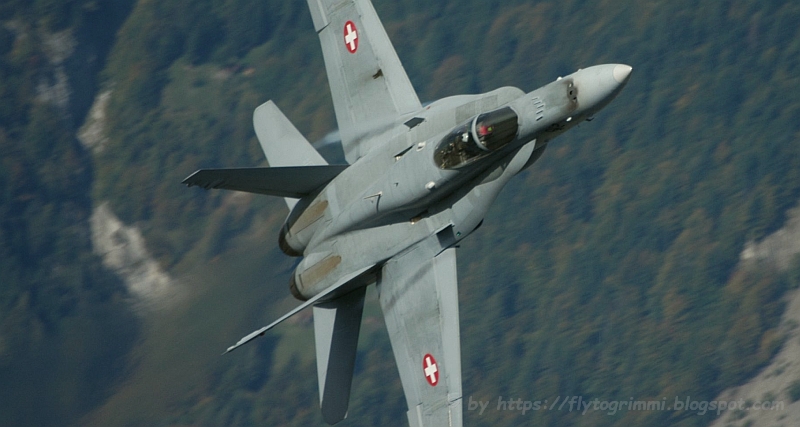 Today (schedule is one day postphoned) the display training has begun. All medium and low altitude trainings will be held in Payerne. 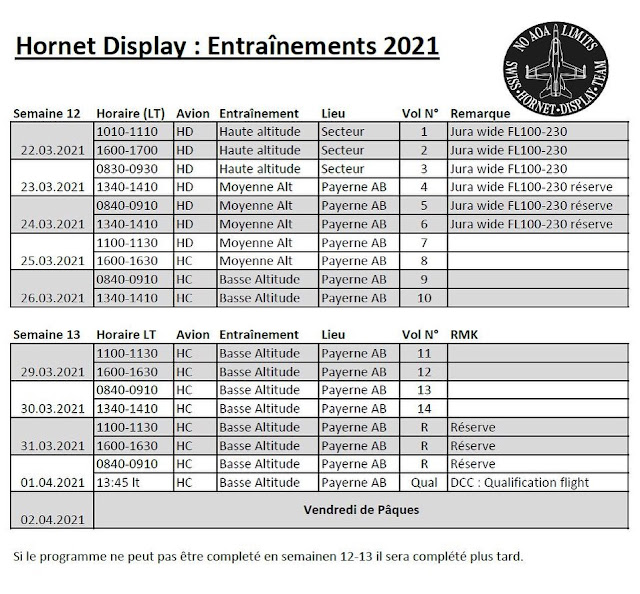 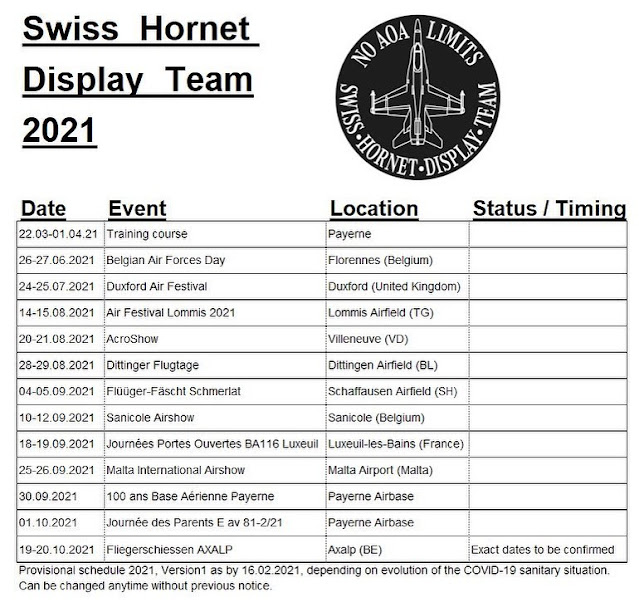 The Office of the Armed Forces Attorney General / Military Justice has brought charges against a pilot of the Patrouille Suisse. This collided with a second Patrouille Suisse fighter jet during a training flight for the “Netherland Air Force Open Days 2016”. The pilot was able to save himself with the ejection seat and was only slightly injured, his aircraft was completely destroyed. A second aircraft was damaged.

The financial amount accounts for:

The “Netherland Air Force Open Days 2016” took place at the Dutch air force base in Leeuwarden from June 7 to 11, 2016, and the Swiss Air Force's “Patrouille Suisse” aerobatic team also took part. On June 9, 2016, two “Northrop F-5E Tiger II” combat aircraft operated by Patrouille Suisse collided near the air force base during a training flight. As a result of the collision, one of the two pilots lost control of his aircraft and operated the ejection seat. He suffered minor injuries during the ejection seat launch and the subsequent landing in a greenhouse. The plane crashed in the immediate vicinity of the greenhouse by a pond and suffered a total write-off. The second aircraft was also damaged by the collision, but remained maneuverable. It could be landed safely by the pilot. The auditor of the military justice has now brought charges against the pilot of the crashed aircraft in a military court.  The auditor accuses the pilot of violating his duty of care during the approach maneuver flown by him and thereby causing the collision. For this reason, he has become aware of the negligent misuse and waste of material (Art. 73 No. 1 Paragraph 1 MStG), the negligent disruption of public transport (Art. 169a No. 1 Paragraph 2 MStG) as well as the multiple negligent non-compliance of Service regulations (Art. 72 Abs. 2 MStG) made guilty. The auditor has accordingly brought charges against the pilot before the military tribunal 2.

The presumption of innocence continues to apply to the defendant.

Video of the crash (source: yt)

The crash of the Patrouille Suisse (first since the founding in 1964!) was only one of a few these days back in 2016. On the same day a Su-27 Flanker of the Russian Knights crashed in Russia killing its pilot and one week after two incidents to the U.S. Air Force Thunderbirds and the U.S. Navy's Blue Angels; on June 2nd a Thunderbirds F-16 crashed near Colorado Springs (Pilot ejected) and a few hours later on the same day Blue Angels Opposing Solo crashed during a display training in Tennessee killing its pilot. 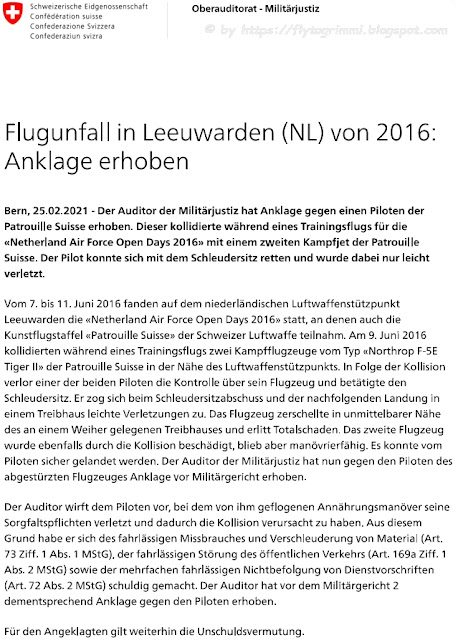 Notes for media professionals: On March 28, 2019, the Kommunikation Militärjustiz published extensive media raw material on the results of the preliminary evidence taken by the military investigating magistrate on the aircraft accident on June 9, 2016.

Participation of the Swiss Air Force on International Exercices 2021 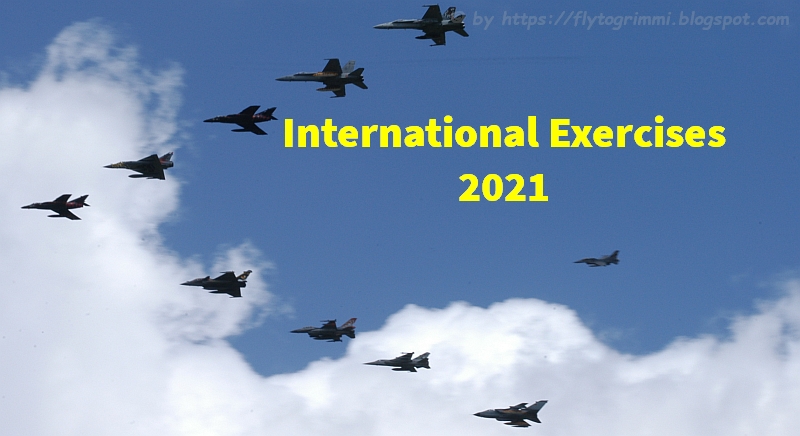 The Swiss Air Force will be participating on the following exercises with aircraft and/or personnel:

- MAGDAYS 21, Germany: Interoperability, with Hornets flying out of there bases in Switzerland (no landings in Germany planned), 3 days.

- VOLFA 21, France: Interoperability, with Hornets flying out of there bases in Switzerland (no landings in France planned), 3 weeks. 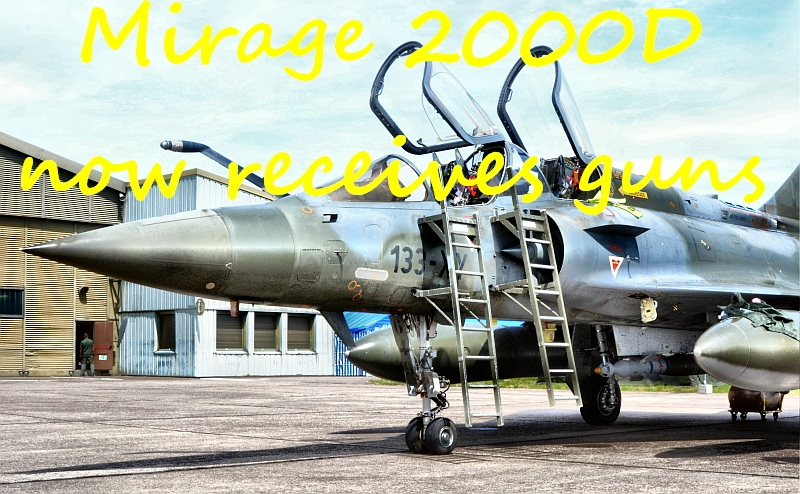 Our western neighbours are modernising 55 of there 71 resting Mirage 2000D with some important mid-life updates to fullfill there role 'till 2030. The biggest surprise is the installation of an external pod for a canon DEFA 30mm named CC422. The direction générale de l'armement (DGA) wants to give the bomber aircrafts more flexibility with that - needing no more the help of the Mirage 2000C or Rafale aircrafts to supress enemy troops / showing of force on the battleground. Other upgrades includes the change from MAGIG 2 to MICA air-to-air missiles and the possibility to further improve the weapon load and new defence and navigation systems.

Some important notes about the Mirage 2000D

- with the withdrawal of the Mirage F1 in 2014, Mirage 2000D received there ASTAC (Analyseur de Signaux TACtiques) reconnaissance pod 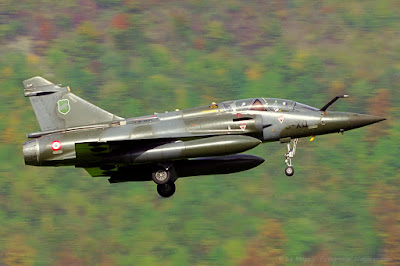 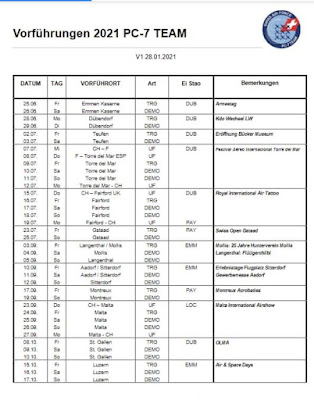