Like every year, the Swiss Air Forces sent some Hornets abroad for intensive night flying operations not possible in Switzerland. After many years in Norway (NIGHTWAY exercise), this year's host of the detachement is Lossimouth in Scotland.
The following Hornets departed Switzerland for Scotland: J-5005/14/15/18/26/232/233

Statement of RAF Lossimouth via fb:

RAF Lossiemouth will host elements of the Swiss Air Force over the next month whilst they undertake their annual night flying training.

Exercise ‘Scotnight’ will last for a total of four weeks, with Swiss FA-18 aircraft operating for the first time in Scotland between Monday 13 November and 8 December, although only two weeks of the exercise will be specific night flying training.
Routinely, the Swiss Government does not permit night flying and as such, the Swiss Air Force generally exercises over Norway; however, due to the Norweigian air base closing for renovation, RAF Lossiemouth has been chosen as a suitable alternative.

In total the Swiss will be bringing ten aircraft and 100 support personnel to Moray, with the crews and engineers getting to enjoy the local area in any spare time they may have. Lieutenant Colonel Aldo Wicki, the detachment Commander said:
“The whole team are hugely looking forward to coming to Scotland for what will be the first time for many of us. It will be a fantastic opportunity not only to train our skills on night-missions and work alongside the Royal Air Force, but aslo to enjoy the Scottish hospitality.” 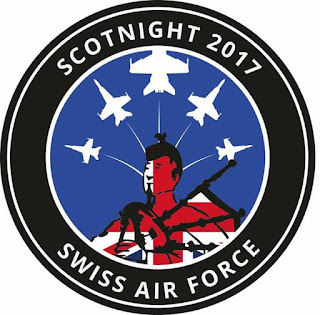 Swiss Hornet - past, present and future

In the aftermath of the NO to finance the Gripen (Federal Votation of Mai 18th, 2014), politic and military leaders of Switzerland are still searching a solution for the future of our Air Force.

From one of the most modern forces in Cold War with more than 750 combat jet aircrafts, Switzerland will becoming an force with only 33 Hornets soon (from 37 delivered four had crashed since):

Flightworthy Tiger F-5E/F will be decreasing from year to year due policy of not making big maintenances anymore and the last flight will be in between 2018 and 2025 (politic/military sends out other dates every couple of months).

Problems with the Hornets:
Hornets will reach there service time limit of 5000 flighthours in 2025. The limit was already increased due production. Also, some avionic parts are no longer available. 124 structural parts like fuel tanks, steering cylinders and Flaps has to be changed already 'till 2025.
Possible Solution: Increasing the service time limit to 6000 flighhours. With that the fleet can fly 'till 2030. Not an option are further reductions of flightours per squadron pilot, actually 120 hours per year. 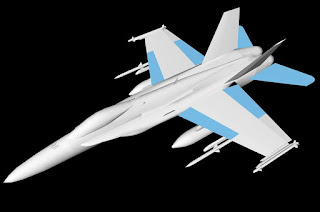 Some of the 124 structural parts to be changed for 2016-2025, not including the increase of the service life up to 6000 flighthours - copyright VBS. Hornet J-5003 is the first aircraft for the modifications.


Political question:
The Air Force want's not only increasing the flighthours, but also put some modern systems in the upgrade program. For example:
- upgrade of the 2nd generation communication system to a modern 5th generation system like the Super Hornet
- upgrade of LINK16 hardware to the same system like on the Super Hornet
- change of the actual Night Vision Goggles to the new Night Vision Cueing Device integrated in the helmet.

With all those changes, the Swiss Hornet will be state of the art 'till 2030. Without those modifications on the sensors, it will loose some superiority from 2025 on but still is an very capable aircraft in the role of Air Policy.

Politicians and Military have to watch other Air Arms around Switzerland with the upgrade of there fleets. A lot of Air Forces are not as fast as whished with the integration of state of the art technology - are we willing to reach them with a new fighter in 2030 or do we want the Hornet to have this technology 'till 2025 already ?

(scroll down for more investments needed by swiss defence forces)

Pictures:
The three european aircrafts ready to participe in the Evaluation 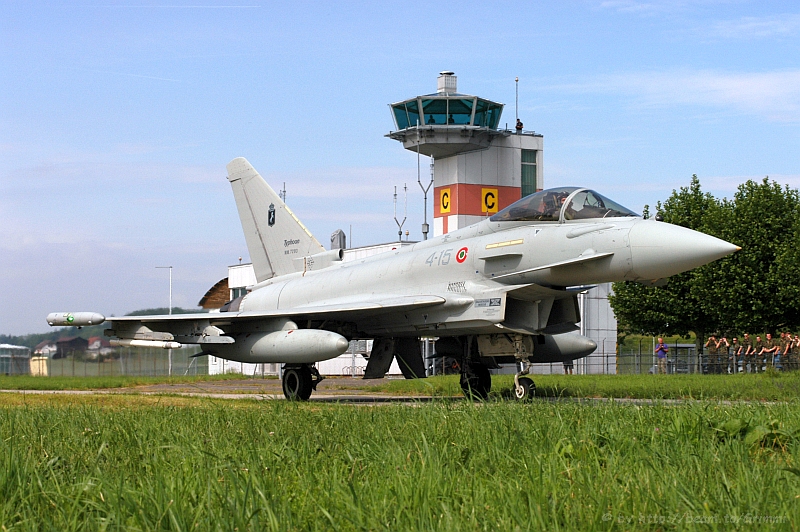 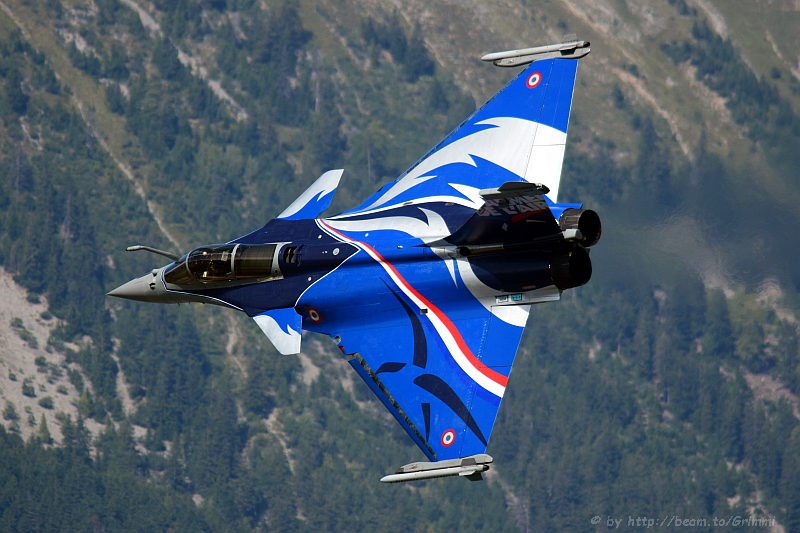 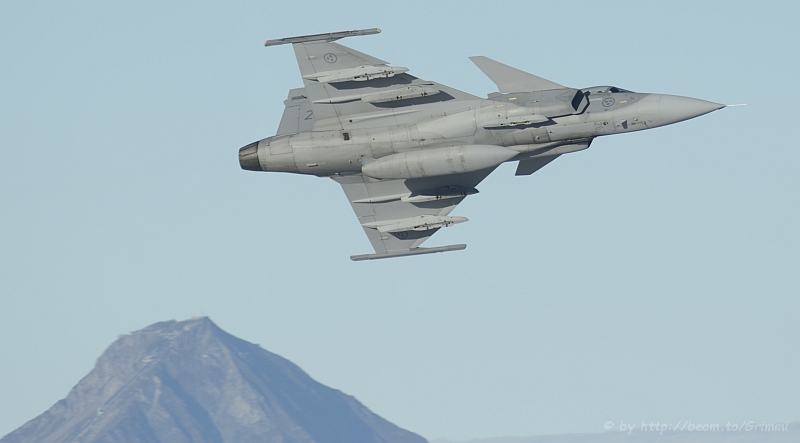 Air Force and Army has to exchange multiple systems in the very near future: Air Defense, Super Puma and tanks are also arriving the end of there service life. 2018 - 2021 around 3 billion CHF are already spoken for new personal equipment, Communication and Night vision devices, modernisation of the Spz (Schützenpanzer) 2000, modernisation of the Cougar Helicopters and FLORAKO Air Defence system. 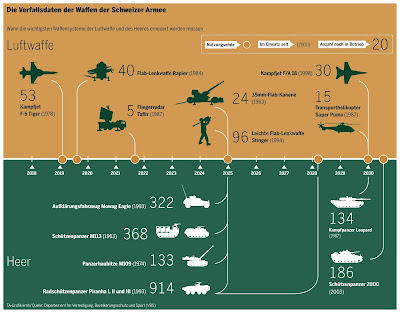 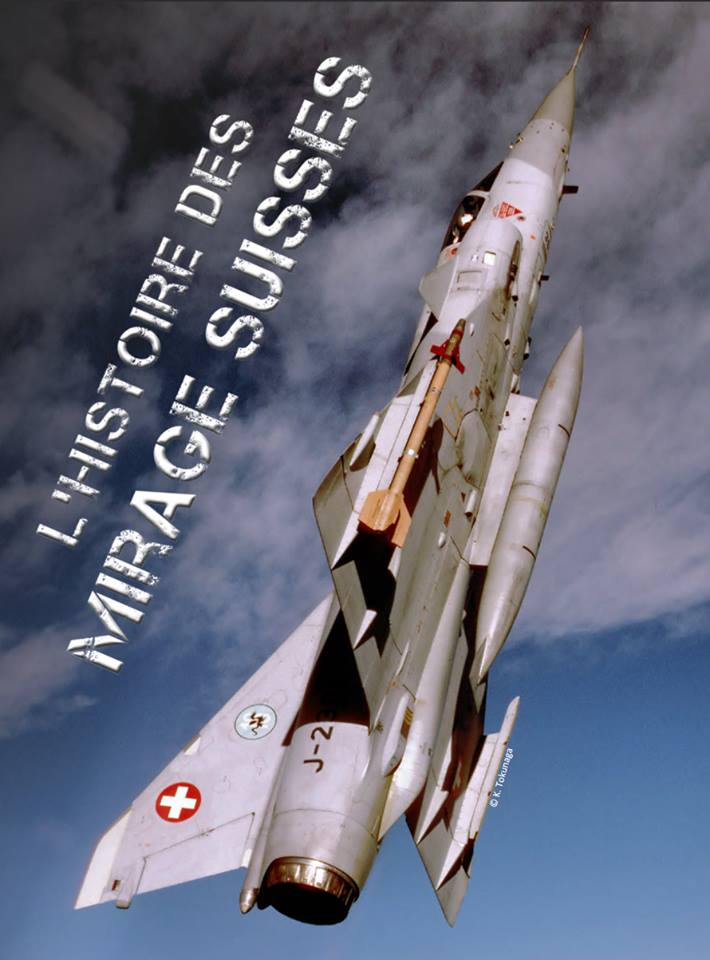 Long time sold out, this very good book should be in everyones posession interested in the Swiss Air Force. Although in french, the informations about our only Mach 2 aircraft are great. Many, many pictures (and yes, some are mine), a lot of aircraft profiles and a special view to the flight gear and helmets used mande a very nice book, the icecream top are the personal histories of Swiss Air Force Pilots with Dassault's well known aircraft. The reedition has some corrections made over the years and is a bit cheaper, one idea more to buy it: