Trial: Swiss Hornet Pilot that crashed in France in 2015 acquitted

The 43-year-old F/A-18 fighter jet pilot was charged with multiple negligent failure to comply with service regulations before Military Court II in Aarau.

The pilot was also acquitted of allegations of misuse and leakage of material. The court refrains from disciplinary punishment. The auditor had requested a conditional fine of 60 daily rates. The defense attorney demanded an acquittal.

The F / A-18 fighter jet crashed uncontrollably near the French town of Glamondans and was totally destroyed. According to the indictment, there was a total loss of around 55 million francs.

During the two-day trial, the pilot had reported the problems during combat training. Until the end he did not know what problem he had. It was about preventing flying into the ground. It was an emergency."I only had one try, only a few seconds. I did what I could," he said. In all other accidents in the past 25 years, the Swiss pilots with the F/A-18 crashed and died. "I have chosen life," said the pilot.

With the happy ending of this story I will also publish my favourite cartoon to this incident, made by Tagesanzeiger cartoonist Kurt Schaad:
(And I say Pierre, that was not a duck !) 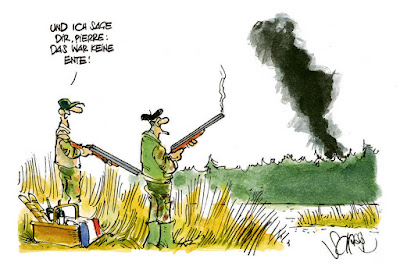